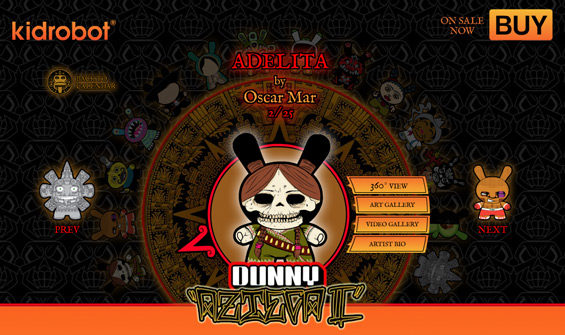 Kidrobot, one of the world’s leading designer toy companies, wanted to create a viral marketing campaign for a new Azteca-themed toy launch targeting toy enthusiasts off all ages. The toy launch was for Azteca-themed toys designed by well-known artists around the world. Kidrobot wanted to create a buzz around the toy launch using multiple marketing channels. Using a pre-launch and post-launch marketing approach Metric was able to build engagement before and after products were available on Kidrobot’s website. The campaign leveraged Kidrobot’s large social media following, paid marketing channels on search engines, paid marketing on social networks, mobile ads, high-end creative work, and a microsite with video chat to engage with the artists. Social media channels were used to get the audience to connect with each of the 14 artists and their designs. The use of social media and live webcasts, before the toy launch, resulted in high engagement metrics and high time-on-site metrics.

The campaign had a pre-launch phase where the designer toy community was targeted via social media ads and paid search ads. Using Facebook targeting Metric was able to segment ads to target an audience connected to designer toys, varying types of toys, and even well-known designers in the toy community