Each year Google holds an event called Google Marketing Live where they showcase the latest developments with their digital marketing products. This year Google announced a lot of major changes and new options that will be available by the end of the year. They announced more than 10 new products releases along with new features on many of their existing products.

The digital market landscape changes quickly and we strive to keep you informed to ensure that you are taking advantage of the latest opportunities. We have summarized five key highlights from the event that we found useful and will be testing and/or investigating this year.

Google will launch new linear TV capabilities so you can extend your reach to traditional TV viewers by purchasing ads on national broadcast networks and local TV stations like NBC, ABC, FOX, and CBS.

Later this year Google will be launching interactive gallery ads that will appear in the top of mobile search pages. They will be very similar to the types of ads you see on Facebook and Instagram. Gallery ads will allow us to include an image and text headline below the images in the gallery ad.

You will be allowed to include from four to eight images per ad. Shown below is an example of a Gallery ad that Google showcased at the conference. 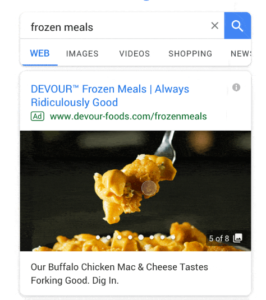 Google has introduced some new redesigns into the Google Shopping experience. Showcase shopping ads are going to be expanded into more of Google’s web properties Including Google Images, YouTube, and the Discover Feed. Showcase shopping will appear on Google when people search for more general terms such as shoes.

When people search for more general terms and click a showcase shopping ad it will expand and reveal more of your products that are relevant to the related search term. This can allow you to advertise an entire product category using Showcase shopping Ads.

The new tool will help automate the process of creating six-second bumper ads and uses machine learning to help create the videos from existing creative.

Facebook and Instagram have also reported that the six-second ad formats are showing the best results when measuring engagement and intent.

Local campaigns are designed for companies that want to drive people into their stores or restaurants. Local campaigns make it easier to promote stores across Google Search, YouTube, Maps, and Google Display Network.

Consumers are using mobile phones to do their research before heading into a store or restaurant. Google will be updating Google maps with new options like Promoted Pins, Promoted Products and Promoted locations to help advertisers drive more foot traffic into their locations.

Here is an example of how an ad would appear in Google Maps: 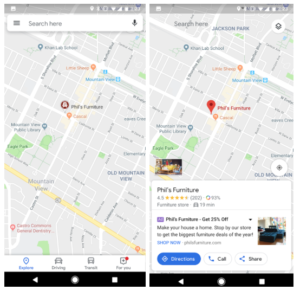